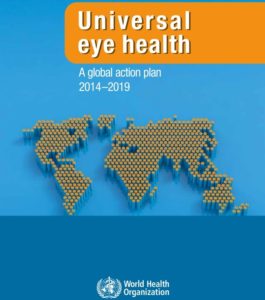 The Global Eye Health Action Plan 2014–2019 (GAP) is an adopted resolution of the Sixty-sixth World Health Assembly (WHA66.4) aimed at reducing avoidable visual impairment as a global public health problem, and securing access to rehabilitation services for the visually impaired. It builds on the action plan for the prevention of avoidable blindness and visual impairment 2009–2013, and the recognition that 80% of all visual impairment can be prevented or cured and about 90% of the world’s visually impaired live in developing countries.

Member States and signatories to the plan are called on to concentrate efforts towards improved coordination, efficient monitoring, focusing the use of resources towards the most cost-effective interventions, and developing innovative approaches to prevent and cure eye diseases.

GAP is underpinned by the following five principles and approaches:

Stay Up To Date